In 1911 Demetrius Chilaiditi described the radiographic findings of hepatodiaphragmatic interposition of the colon in 3 cases, a syndrome which now bears his name [1]. The incidence of this anomaly in the general population ranges from 0.025% to 0.28% [2–4]. Typically this is an incidental radiographic finding, often asymptomatic; however, abdominal pain, distension, vomiting, anorexia, constipation have been reported in the clinical presentation of this rare syndrome [5,6].

A 60-year-old man presented with a progressive abdominal pain, vomiting and distension of 6 hours duration. The patient was dehydrated but afebrile. The abdomen was diffusely tender and distended, bowel sounds were sluggish and there was no guarding or rigidity. His past history was significant for severe duodenitis, chronic diarrhoea, hypokalaemia and metabolic acidosis. Erect and supine abdominal radiographs revealed distended bowel loops (Figure 1) and air under the right hemi-diaphragm (Figure 2). Laboratory studies showed that a white blood cell count of 1.43 × 109/L (normal range 0.4–1.0 × 109/L); serum potassium level 2.8 mmol/L (normal 3.5–5.0 mmol/L); and serum bicarbonate level 11.0 mmol/ L (normal 18–22 mmol/ L). 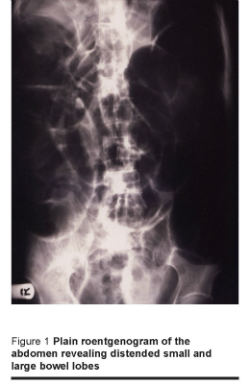 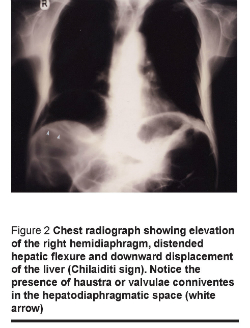 The patient was diagnosed to have perforated viscous. The patient was given intravenous fluids and potassium to correct his metabolic acidosis and hypokalaemia. At laparotomy, the patient was found to have hugely distended bowel loops extending from the ligament of Treitz down to the rectum. The right colic (hepatic) flexure was interpositioned between the right hemidiaphragm and the liver. There was no perforation, and the rest of the abdomen was normal.

Mobilization of the right hepatic flexure back to its anatomical site and a cecostomy was performed through the appendiceal stump. The patient continued to have metabolic acidosis and severe hypokalaemia post-surgery for which a nephrology consultation was obtained and the patient was diagnosed as a case of renal tubular acidosis (Table 1). The patient was kept on high doses of intravenous potassium (90 mEq/day) to maintain a normal serum concentration of potassium. The patient improved slowly, with oral feeding re-established on the 5th postoperative day, and he was discharged on the 7th postoperative day. The patient developed 2 similar attacks of pain and distension which responded to medical treatment in the month following discharge.

Hepatodiaphragmatic interposition of the bowel is a rare cause of air under the diaphragm and is termed Chilaiditi sign, or Chilaiditi syndrome when it results in symptoms [1]. Several associated conditions have been reported with Chilaiditi syndrome; volvulus of the transverse colon, post-necrotic cirrhosis, obesity and upper endoscopy [5–11]. Hypokalaemia is a recognized cause of hypomotility of the bowel and can lead to adynamic ileus. In this case, the cause of ileus was severe hypokalaemia resulting from type-1 renal tubular acidosis. The causes of renal tubular acidosis include hereditary disorders, autoimmune diseases and certain drugs such as amphotericin B, lithium and analgesics. None of these causes could be established in this patient [12].

The association of air under the diaphragm in a patient presenting with acute abdomen, raised the possibility of bowel perforation. The presence of abdominal tenderness and leukocytosis supported this diagnosis and led to operative intervention. To our knowledge, the development of Chilaiditi syndrome as a complication of severe hypokalaemia from renal tubular acidosis has not been reported in the English language literature. Because of its rarity, Chilaiditi sign is often confused with free, intra-abdominal gas which always indicates perforation of a viscous organ, such as perforation of peptic ulcer disease, diverticulitis or malignant tumours. However, the presence of haustra or valvulae conniventes in the hepatodiaphragmatic space aids the distinction between intraluminal and free gas. The fixed gas echo under the right diaphragm on ultrasound and the absence of the levelling of an air fluid level in the left decubitus position should suggest intraluminal instead of free gas [11–14]. A computerized tomography of the abdomen showing the bowel between the liver and diaphragm confirms the diagnosis of Chilaiditi syndrome [15].

Patients with Chilaiditi syndrome often respond to non-operative treatments such as nasogastric decompression and laxatives [5,13]. However, in patients with suspected volvulus of the colon, stomach or the small bowel, surgical exploration of the abdomen is recommended [4,6,9,16].

In conclusion, Chalaiditi sign should be kept in mind in all patients presenting with air under the diaphragm and distended bowel loops. Recognizing bowel haustrations in the hepatodiaphragmatic space confirms the diagnosis. Surgical management of these patients depends on the underlying etiology.

We would like to thank Dr Sana Batarseh (surgical resident) for her keen work in the documentation of the case and follow up, and Saleh Massad (medical photography) for helping in the pictures.