Phase 2 of the Global Fund to Fight Tuberculosis, AIDS and Malaria (GFTAM) Round 7 in oPt 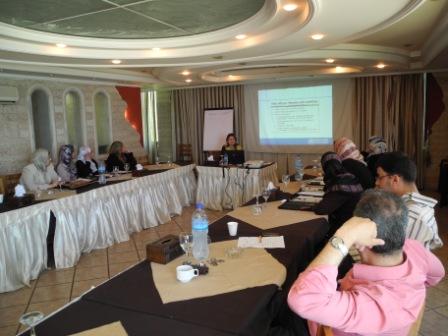 In December 2011, WHO finalized the signing of phase II for its participation in Round 7 of the GFTAM’s proposal process. The 5-year programme entitled “Future hope: scaling up universal access to prevention, treatment and care in the West Bank and Gaza”, began in 2008 and represents oPt’s first participation in the global effort.

The programme is supported by a grant of US$ 10.8 million under the administration of the United Nations Development Programme and includes WHO, in addition to other partners collaborating within their service delivery areas: the Ministry of Health, United Nations Relief and Works Agency for Palestine Refugees in the Near East (UNRWA), United Nations Population Fund (UNFPA), United Nations Office on Drugs and Crime (UNODC), UN Women, UNICEF and local nongovernmental organizations, as well as the interministerial national AIDS committee. The new phase will continue the work through 2013 in combating HIV, AIDS and sexually transmitted infections through improving prevention, enhancing professional capacity for treatment and care and strengthening coordination for an enhanced HIV response.

WHO is the technical body responsible for progress in four areas: voluntary testing and counselling, universal precautions (such as blood safety), antiretroviral treatment (ART), and surveillance and monitoring; Phase II introduces an important fifth area – care. Globally, WHO goals focus on community action for prevention for those most at risk, as well as for the general population, improvement in the quality of life for those affected, reduction in morbidity and mortality, and reinforcement of the capacity of national responders.

Opt is considered to be a low prevalence country for HIV/AIDS. HIV case reporting began in 1989, and since then, there have been 72 cumulative identified cases in the community. In 2010, 20 people were reported as being HIV positive, 11 of who had AIDS. Only 9 patients were receiving antiretroviral treatment. Cases were almost evenly divided between the Gaza Strip and West Bank, and were mostly male. The most common cause of HIV infection was heterosexual contact with an infected person, and the second main cause was exposure to contaminated blood or blood products. 80% of HIV cases were in the 20–49 year age group.

In late 2011, 17 persons were receiving ART – West Bank (12), Gaza Strip (5). However, as elsewhere in the world, diagnosis remains an issue, as patients may not seek health care and many local physicians are unfamiliar with the disease and the pattern of symptoms.Globally, HIV cases are estimated to be four times the number that is actually reported, due to the very low level of voluntary HIV counselling and testing. The tuberculosis (TB) incidence rate remains low at 0.87%; the multidrug resistance rate for TB is 4.3%.

“One of the greatest problems for HIV patient is not the disease but stigma. People living with HIV are victims of a virus and should not be judged. It is not our concern to know how they got it.” Dr Randa Abu Rabie, Head of the WHO HIV/AIDs and TB project in the West Bank and Gaza Strip.

Important achievements in WHO’s implementation of the first phase of the Global Fund in the oPt included: (1)introducing an HIV testing strategy into the National Health Strategy, 2000–2015; (2) developing guidelines for use with ART; (3) contributing to research on at-risk groups; (4) establishing the first clinic, in Ramallah, for care of HIV patients, equipped with a CD4 machine for detecting treatment potential in patients; and (5) introducing the “rapid test” for HIV which anyone can administer and which increases test compliance.

Previously, HIV cases could only be diagnosed and treated in Israel which meant patients needed to secure permits for travel and manage higher transportation costs for travel out of their communities, while the high cost of care in Israel and ART medicines were a significant financial burden for the national referral system. In 2009, the Global Fund made HIV treatment possible in oPt by providing treatment guidelines and access to costly ART medicines through special international procurement.

Funds from a TB control grant are being used to provide short term technical support to the national TB team in the West Bank and Gaza Strip and strengthen their capacity. The Ministry of Health is responsible for the provision of TB diagnosis and care and has provided free diagnostic and treatment services since 1993 under extremely challenging socioeconomic and political conditions.

WHO will sign phase 2 of the TB control grant in mid 2012.Technical support will continue to be provided and a TB inventory study will be conducted in phase 2, in coordination with the Ministry of Health of oPt.

The main achievements of phase 1 have been the: development of TB guidelines, outlining of a strategic plan, production and endorsement of training modules, clinical placement of two medical doctors to strengthen the capacity of treating physicians and introduction of an online system to monitor TB prevalence and strengthen the national surveillance system.

Ministry of Health of the occupied Palestinian territory