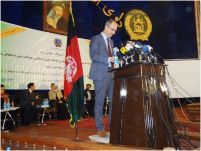 He has been working for over 25 years in the field of international public health in Africa, Asia, and Europe. He has extensive experience with health sector reforms, systems strengthening, capacity development, primary health care, disease control, and HIV/AIDS.

Prior to joining WHO, he was managing for the Netherlands Ministry of Foreign Affairs a large and complex health and HIV/AIDS support-programme portfolio in Tanzania (2005–2013). He was also health sector co-lead, representing and coordinating the many development partners vis-à-vis the Government of Tanzania, civil society organizations, private sector and global initiatives; supporting them in their aim to increase and improve service delivery, strengthen health systems, leading to improved health outcomes.

Before his assignment in Tanzania, Rik Peeperkorn worked as Associate Director, Country and Regional Support Department, with UNAIDS in Geneva (2002–2005) where he was responsible for the conceptualization and establishment of the UNAIDS Regional Technical Support Facilities, mainstreaming HIV/AIDS in development instruments and sector programmes, policy advice and programme guidance. As a member of the UNDG team, he participated in the OECD-DAC Working Group which prepared and facilitated the Paris High Level Forum (2005), leading to the Paris declaration on “Harmonization, Alignment, and Aid Effectiveness”.

From 1996–2002, Rik Peeperkorn served as Sector Specialist Health and HIV/AIDS for the Netherlands Ministry of Foreign Affairs in Zambia and Malawi. Besides managing a comprehensive support programme in Zambia and Malawi, he co-developed a large regional HIV/AIDS programme for Southern Africa. He played a guiding role in the health sector reforms processes in the framework of developing sector wide approaches.

Previous to that, he held various positions at the different layers of the health system ranging from district, provincial to national level, and worked for local governments, universities, a nongovernmental organization and UNICEF, in various countries including, the Netherlands, Lesotho, Zambia, Madagascar, Bangladesh, Pakistan, and Afghanistan.

Rik Peeperkorn’s specific interest are health systems and he researched, directed, and co-produced a documentary film “Health Reforms at Work: Experiences with the Sector Wide Approach in Zambia” (2004).  He is a passionate traveller and football fan, and has a keen interest in modern history.

Rik Peeperkorn received his MD from the University of Amsterdam (1986), and obtained his MPH from Johns Hopkins University-School of Public Health (1992).

Rik Peeperkorn is a Dutch national. He is married and has a son.

Country Cooperation Strategy at a glance